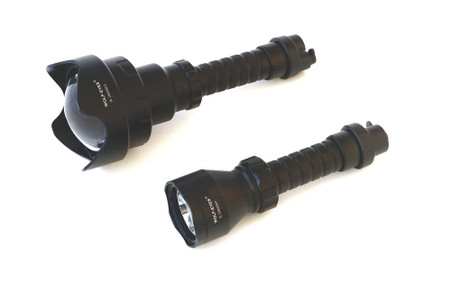 We designed the Wolf Eyes Seal from the ground up to be a rifle spotlight - then we added an interchangeable second head so you could also use it as a regular flashlight or for close firearm work!  It all starts with the 25.4mm (1" inch) body, so chosen as it fits the most firearm mounts (including picatinny) which gives you the widest choice of mounting options for your different rifles. You can mount it on top of the scope, to the side of the scope, underneath the barrel, underneath or on the side from a picatinny rail, you choose the mounting position which best suits your shooting style. Inside the body of the flashlight we added a brass liner, one for additional strength, two to give better electrical conductivity but three most important of all to draw heat away from the high output LED and use the full metal body as a heatsink, with this output we need all the cooling we can get. This is designed to prolong the life of your LED by keeping the high output LED far cooler than it would otherwise be.
The tailcap is the Wolf Eyes Dual Tailcap, which means you can use it like a regular tailcap or screw on the included tapeswitch for faster control of your light.
Up front is a single LED (to give maximum throw rather than higher total light output) of 1,070 lumens. This is run by a regulated control unit. Regulated means the light doesn't fade as the battery uses it's power up, the regulation unit increases amps as the voltage lowers to ensure the light coming from the LED is the same. This means the light coming from your LED will not dim till the last 10% or so of runtime. In practical terms this means you could use the rifle light over more than one night and still have maximum range. The control unit means you can have high beam, medium beam, low beam and even emergency strobe. Of course, with a Wolf Eyes you can recharge at any time.
Of the two heads, the main spotlight head catches your attention first due to its 83mm size and huge aspheric (magnifying) lens. You then notice it is approximately the same 83mm back from the outside of the lens to the LED (similar to a magnifying glass lighting paper by the sun, the lens works best when set back the right distance from the LED. Of course all this size and depth is to maximise the throw from the LED in this light, beyond what is seen in standard rifle mounted flashlights or internally powered rifle lights. This LED, lens size and lens depth all combine to produce usable light at up to 400 metres (ANSI rate this light at 652 metres, though we don't think it is suitable to shoot with at that distance). The large size and fine focussing capability of this head means it is even possible to focus for a slightly wider and shorter beam, something rarely effectively possible with aspheric lenses. New Updated main aspheric head which has reduced total weight of the torch to 387 grams.
The smaller 50mm deep set mirror reflector head provides a great combination of spot and flood (in comparison to the aspheric head above which is all spot) out to about 150 metres. This makes it a great general use flashlight or for firearm use on feral pests such as pigs or rabbits where distance requirements are usually less than 150 metres and the extra flood light surrounding the main spot is advantageous for fast moving game. The Seal with the reflector head is a very nice standalone flashlight, we can see many choosing to buy a Seal to use as their general flashlight, then screw the aspheric lens on for that once a year shooting trip. Other may choose the Seal because it offers the best of both an aspheric lens head and a reflector head - by having both heads!
The Wolf Eyes Seal uses our rechargeable lithium ion LRB168A battery, which means it is compatible with your other Wolf Eyes torches and offers all the benefits of lithium ion such as high capacity, very low self discharge (long shelf life when not being used) and ability to be used in sub zero conditions. The battery and charger are included with the Wolf Eyes Seal, as are the two heads.

This product hasn't received any reviews yet. Be the first to review this product!

All prices are in AUD.